Expressed in terms of gross premiums as a percentage of the country’s gross domestic product (GDP), insurance penetration has traditionally remained low in Pakistan.
However, official statistics show a significant improvement in recent years. Not only the country’s insurance penetration increased from 1.3% of the GDP in 2010 to 1.73% in 2013, insurance density also rose substantially over the same period.
Insurance density – or the ratio of gross premiums (in dollars) to the country’s total population – went up from 6.36% in 2010 to 9.39% in 2013.
The overall trend becomes more obvious by looking at the growth rate of gross premiums that insurance companies collected in the last three years. They amounted to Rs100.7 billion in 2010 and reached Rs176.5 billion in 2013 – the last year for which official data is available. It translates into the compound annual growth rate of 20.55% for the last three years. 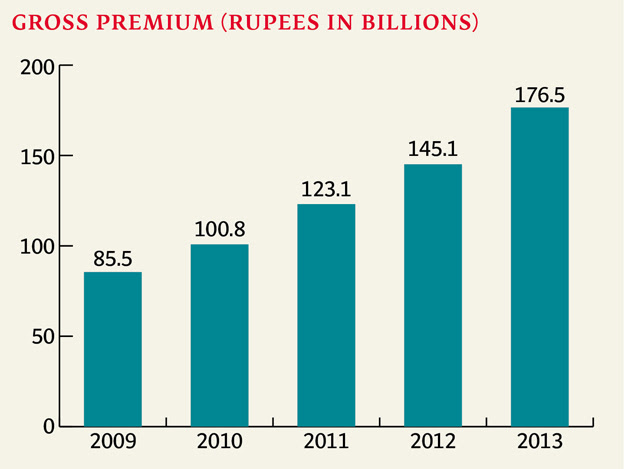 As a dividend of their enhanced footprint in the economy, insurance companies managed to expand their bottom lines significantly in recent years. Excluding government-owned State Life Insurance Corporation (SLIC), combined profits of all life and non-life insurance members of the Insurance Association of Pakistan amounted to Rs3.4 billion in 2010. They clocked up at Rs9.7 billion in 2013, which translates into a massive increase of 41.7% per year between 2010 and 2013.
SLIC has yet to release its financial results for 2012 and 2013 because it does not have a full-time chairman.
In addition to the statistics showing tangible growth, the regulatory framework for the insurance industry underwent huge changes in the last many years that reduced entry barriers for new players.
A case in point is the introduction of Takaful Rules 2012, which allow conventional companies to set up dedicated window operations to sell Islamic insurance. The move was bitterly contested in court by Takaful players that feared competition from well-established insurance players.
But the legal battle has finally ended largely in favour of the conventional companies. Industry sources say at least 10 conventional insurance companies will have entered the Takaful market by December, resulting in huge investments and thousands of new jobs. 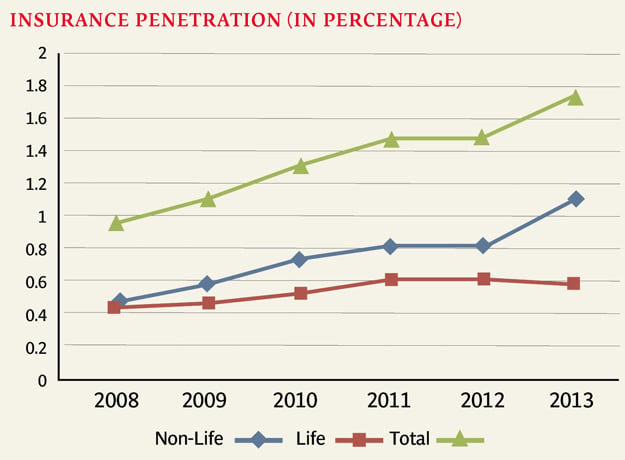 Similarly, a number of foreign companies have shown interest in entering Pakistan’s insurance industry. They include the world’s leading insurance brokers Marsh and Lockton.
Similarly, Rosewood Insurance Group of Switzerland has shown intention to acquire a 74.9% stake in TPL Direct Insurance. Sources say the Swiss group wants to buy a significant shareholding in two other insurance companies as well.
Progress in the micro-insurance segment has also been encouraging. Firms like MicroEnsure and Bima, which provide system support and IT backup to micro-insurance providers, are eyeing the Pakistani market.
Analysts believe the country’s insurance industry, which went downhill following its nationalisation in the 1970s, is making a strong comeback that may prove long-lasting.
The fact that the insurance industry had its first full-time commissioner at the Securities and Exchange Commission of Pakistan (SECP) three years ago played a key role in recent developments.
Improved governance structure and a fully functional regulator in the last three years have resulted in rapid growth and foreign investment in the insurance industry. But with the retirement of SECP Insurance Commissioner Mohammed Asif Arif in the first week of September, industry officials are wondering whether the recent upturn in business activities will come to a grinding halt.
The SECP has been operating without a full-time chairman for over a year now. Instead of having five to seven members, the SECP will be left with only two commissioners after the retirement of Arif.
Letting the insurance division of the country’s apex regulatory body operate without a full-time head may undo the successes achieved in the last three years.
Posted by Unknown