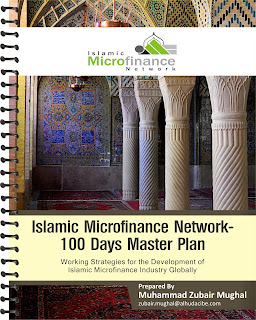 
It was also decided during the meeting that AlHuda CIBE will develop guiding principle on Salam, Murabaha and Mudarabah for Islamic Microfinance Network, which will be a source of guidance for institutions related with Islamic microfinance. 100 days master plan will be initiated on 30th May, 2013 and on its completion a general meeting will be organized to evaluate the achievement of Master plan related targets#
Posted by AlHuda: Centre of Islamic Banking and Economics 2 comments: 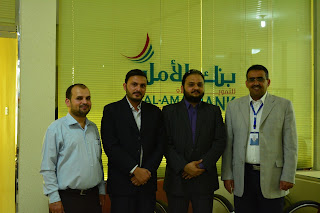 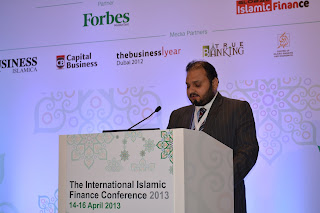 (Abu Dhabi)Islamic Microfinance is rapidly gaining acceptance in Muslim and Non- Muslim countries due to its remarkable performance in poverty eradication; because of which, this industry is making quick progress. According to our careful estimate Islamic Microfinance market’s worth has reached $1 billion. These views were expressed by Muhammad Zubair Mughal, the Chief Executive Officer of AlHuda Centre of Islamic Banking and Economics (CIBE) ,while, addressing the International Islamic Finance conference as a Guest of Honor. This conference was organized in Abu Dhabi-the capital of United Arab Emirates, in which the experts and researchers of Islamic Microfinance industry participated from all over the world. The event was organized on 14th- 16th April, 2013 in Park Hyatt Hotel- Abu Dhabi by the international research and publication organization- Emerald in association with Abu Dhabi University.

Muhammad Zubair Mughal said that currently more than 300 Islamic Microfinance institutions are offering their services to 1.6 million clients in almost 32 countries. Due to Islamic microfinance’s significant role in reducing poverty, international donor institutions and multilateral organizations like USAID, IDB, ADB, IFAD, UNDP, World Bank and IFC etc have clearly explained their policies in different countries to further strengthen Islamic microfinance, which will ensure the quick advancement of Islamic microfinance in near future. He added that if we take an overview of last 10 years of Islamic finance industry, it can be observed that with the passage of time Islamic banking, Sukkuk, Takaful and Islamic fund etc have progressed quickly. While, in next 3 years Islamic microfinance will progress more quickly relative to other Islamic financial products.

Muhammad Zubair Mughal said that almost half of the world’s poverty is prevalent in Muslim countries. One of the reasons of high poverty rate in Muslim countries is the refusal of Muslims to take interest based loans. Islamic Microfinance is an essential tool to eradicate poverty from Muslim world otherwise the attainment of the United Nation’s Millennium Development Goals is impossible#
Posted by AlHuda: Centre of Islamic Banking and Economics 1 comment: