Pakistan to host an International Conference on Islamic Funds

23 February 2012 (Lahore) The Financial world is banking upon the Islamic Finance and Shariah Compliant Investment Funds, in the backdrop of the current global financial crisis, which in turn is bringing a boost to the Islamic Funds and Sukuks. Considering the healthy global growth in this sector, an International Conference is being organized on April 23, 2012 in Karachi in order to strengthen the Islamic finance sector in Pakistan. Research papers will be presented and productive discussions will be undertaken to highlight the role of Pakistan in the global Islamic finance market. Islamic finance is making healthy growth in Pakistan which now stands over 1000 Islamic banking branches from 05 Islamic Banks and 13 Conventional Banks with Islamic finance operations. In addition, we have good support from 05 Takaful Companies, Mudarabah Companies, 20 Islamic Microfinance Institutions, over 30 Sukuk issues and 15 fund managers have launched their Islamic Funds, which have made prominent role of Pakistan in the global Islamic finance canvas.

The organizer of this International Conference and Chief Executive Officer, AlHUda-Centre of Islamic Banking and Economics, Mr Zubair Mughal while declaring the objectives behind this conference, highlighted the valuable contribution by Pakistanis in research, shariah and skilled professionals bringing strong alternative in a difficult financial situation faced by the world.

Mr Zubair added that Islamic funds are rapidly gaining popularity in US$1.3 Trillion worth of global Islamic finance market gaining 6.1% share from over 650 funds spread all over the world, of which the highest 230 is in Saudi Arabia while Malaysia has 172, Cayman Island 59, Bahrain 46, Luxemburg 29, Dubai 16, Singapore 11 are the prominent players in the world.

Zubair Mughl further informed the media that a healthy number of participants from different countries will be attending in this conference which will be followed by a Two Days Specialized Workshop on the Shariah and Regulatory Framework for Islamic Funds on 24th and 25th of April, 2012 to be conducted in Karachi, Pakistan.

Posted by AlHuda: Centre of Islamic Banking and Economics 1 comment:

Posted by AlHuda: Centre of Islamic Banking and Economics No comments: 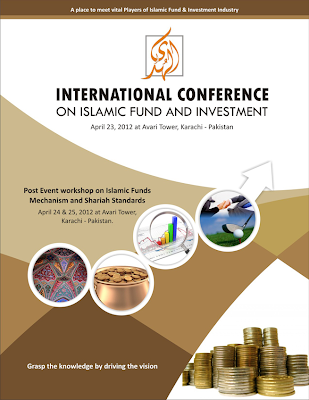 Greetings from AlHuda Centre of Islamic Banking and Economics – Pakistan

AlHuda Center of Islamic Banking and Economics is a recognized name in Islamic banking and finance Market for Trainings, Research and Advisory over the last six years. We are dedicated to serve the community as a unique institution providing Trainings, Education and Consultancy in the field of Islamic Banking & Finance not only in Pakistan but all over the world.

AlHuda Centre of Islamic Banking and Economics is pleased to invite you on the “International Conference on Islamic Fund and Investment” scheduled to be held on 23 April, 2012 at Avari Tower, Karachi - Pakistan.
The Islamic funds market is one of the fastest growing sectors of financial industry not in Muslim but also in Non Muslim Countries. The key goal to conduct this conference is to highlight the value and importance of Islamic funds, Islamic means of investments and alternatives and to identify the characteristics that distinguish Islamic funds from conventional investments.

At this conference, you will enjoy meeting and setting connections with the key players of Fund & Investment Management Industry. You are requested to “Support & Participate” in this international conference. Your timely confirmation will facilitate us to finalize the event details and schedules. For any further details about conference, please visit: www.alhudacibe.com/Islamicfunds2012

Posted by AlHuda: Centre of Islamic Banking and Economics 6 comments:

Pakistan is emerging as a global leader of Islamic Microfinance: Zubair Mughal