(Manila - Philippines) There are multiple opportunities in Association of Southeast Asian Nations (ASEAN) countries to promote Islamic Finance, through which Halal Industry can be flourished rapidly in the region. These views were expressed by Muhammad Zubair Mughal, Chief Executive Officer, AlHuda Centre of Islamic Banking and Economics (CIBE) during his speech at “First National Halal Forum” in Manila which was organized by Department of Science and Technology, Government of Philippines at a local hotel (Shangri-La Makati) on 29th- 30th October, 2013, in order to grow Halal Industry and Economy on both regional and international level. 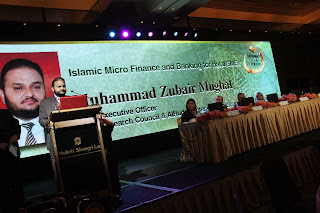 During his address to the Forum, he stated that Islamic Finance and Halal Industry are complement to each other. Micro and Small Medium Enterprises (MSME’s) can be energized by utilizing Islamic Finance concept in the region which will be cause to reduce in poverty and ultimate socio-economic prosperity in the ASEAN member Countries. He, presenting an analysis on ASEAN countries (Malaysia, Indonesia, Brunei Darussalam, Loa PDR, Myanmar, Singapore, Thailand and Vietnam), stated that the approximate total population of ASEAN countries is 600 million including the Muslim Population more than 40% (240 million) which is a potential indicator for Islamic Finance growth whereas in Malaysia, Indonesia and Brunei Darussalam already have significant contributions in Islamic Banking, Takaful, Sukuk and Islamic Funds, while Philippines and Thailand are being considered as future potential markets for Islamic Banking and Finance in ASEAN countries.

He explained that Islamic Banking and Finance is the system not a religion which can be utilized by Muslim and Non-Muslims to get absolute benefits from the best services of Islamic Banking and Finance as its best example is the South Africa where Muslim population is less than 2% of the whole population but it has more than 5 Islamic Banks, 13 Islamic Funds and 2 Takaful companies working actively, which are equally famous among Muslims even non-Muslims communities because of their best practices and services. He said that Philippines is an important country of the region with having 100 million populations, approximately, containing Muslim population by more than 7% which bears it out that there are momentous chances for the promotion of Islamic Finance and, apparently, government of Philippines found active in this concern and it will, definitely, energize Islamic Banking and Takaful in result. He also stated that government of Philippines can generate financial resources for national level mega projects by utilizing the concept of Sukuk (Islamic Bonds).


National Halal Forum continued for two days at Manila where experts from different countries of the world participated including Pakistan, Turkey, Malaysia, Indonesia and Thailand #
Posted by AlHuda: Centre of Islamic Banking and Economics