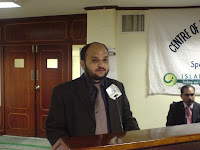 ( by : Zubair Mughal )
Takaful is an Islamic alternative to the conventional Insurance. The words ‘Takaful’ has been derived from the Arabic verb ‘Kafala’ which is also referred to as ‘Kafalat’ in urdu language, its means to guarantee, to help, to take care of one another’s needs. The Takaful system has been structured keeping in view the Islamic system of Dait (Blood Money) which is the philosophy behind mutual assistance/Kafalat. Before going into further details about Takaful, we shall have a look at the conventional insurance system and the factors that led to it being considered Haram or illegal in the society. If the importance of insurance is observed in detailed, the following aspects emerge;
1-To bear the risk/threat
2-To protect others
3-To share the loss

Keeping in view the basic elements of insurance, it is evident that nowhere in Islam the above mentioned aspects are prohibited and that there is no reason to be considered haram or illegal since Islam itself encourages to help others. Narrated by Hazrat Abu Huraira (R.A.) that the Prophet Muhammad (PBUH) said: “Whosoever removes a worldly hardship from a believer, Allah will remove from him one of the hardships on the Day of Judgment.”(Sahih Muslim, Hadith. 59)

Islam teaches us not only to have total dependence on Allah but also emphasizes on self protection against risks and threats. Narrates by Hazrat Anas Bin Malik (R.A.), one day Prophet Muhammad (PBUH) noticed a Bedouin leaving his camel without tying it. He (PBUH) asked the Bedouin, “Why don’t you tie down your camel?” The Bedouin answered, “I put my trust in Allah.” The Prophet (PBUH) then said, “Tie your camel first, and then put your trust in Allah.” (Sunan At-Tirmidhi,.1981). Islam infact even goes to the length of ensuring that incase of one’s death, there should be enough to support the widow for at least a year. Therefore, it is decided that the philosophy of Insurance does not contain any flaws from the Shariah perspective and it can not be considered Haram or illegal. Research has shown that the fault lies not in the philosophy itself, but in the methodology carried out by the insurance companies due to which it is looked upon narrow mindedly.
1-Riba (Interest/Usury)
2-Gharrar (uncertainty)
3-Maysir
Conventional insurance contains both direct and indirect forms of Riba. The direct Riba is in the of Premium and indirect Riba in the shape of interest earned on interest based
Investments e.g. by giving loans to financial institutes and banks on interest or by investing in interest based activity at stock exchange etc. thus promoting interest.
Second factor is Gharrar, where the person being insured does not know when he would bear the loss and to what amount, or the insurer can ascertain the amount and time with respect to profitability. Third element is Maysir, which involves a chance of total loss to one party in the contract, where profit to one person is directly related to another person’s loss. While the relationship of claim between the insurance company and its client is related to each others profit and loss. Thus, by removing these three harmful elements of Riba, Gharrar and Maysir from the conventional insurance, we can call it ‘Takaful’. Now, we shall examine how these elements have been removed in the Takaful system.

The first ever Takaful Company in the world was established 27 years ago in Sudan in 1979 by the name of Sudan Islamic Insurance. It would be interesting to know that the founder of the company was a Pakistani. Following suite, in the same year another company by the name of Islamic Arab Insurance company (IAIC) was formed in United Arab Emirates but it took sometime for the company to establish.

There are approximately more than 155 Takaful and 8 Re-Takaful companies operating globally with an approximate sum of $ 3 Billions Takaful contribution. Out of these companies 60% are General Insurance Companies while the remaining 40% are working as Life and Family Insurance Companies. Geographically, 46% of them are located in South East Asia, 32% in Middle East, 17% in Africa and 5% in Europe and America. For the 23% of the Muslim population of the world, the existence of 260 Billion US dollars worth of Islamic Financial Market is a very encouraging factor for the Takaful Companies.

The systems used by Takaful companies in the world can be divided into three models;
1) Mudarba Model (Sudan, African states)
2) Wakalah Model (Malaysia and other countries)
3) Wakalah Waqf Model (Pakistan)

SECP is the regulatory authority for Takaful companies in Pakistan and has formulated rules and regulations for the companies by making amendments in the Insurance ordinance 2000 while keeping in view the Islamic perspective/principles of Wakalah and Waqf.
Pak Kuwait Takaful was the first Takaful Company in Pakistan and soon after

All the Takaful companies operating in Pakistan are based on the Wakalah Waqf model.
The operational methodology/system of the model can be explained through the following example; Some individuals form a Fund on the basis of Waqf and subsequently donate/contribute in the fund, hence giving it the name Participation Takaful Fund ( P.T.F ) with an understanding that if any calamity/risk befalls any of the participants of the fund, a decided amount would be donated (Tabbaru) to the effected. The fund would be monitored by an organization (Takaful Company) on the pattern of Waqf, to safeguard the deposits and to increase the profitability of the fund. Subsequently, the company would be paid its Wakalah agency fee. The example of a Waqf is similar to that of a Mosque Waqf Committee which receives its contributions from people for the maintenance of the Mosque. Likewise, Takaful Company also acts as a Waqf operator. It will receive donations from the people and strengthen the fund. Incase of a calamity to either of the members of the Fund, the company would pay the compensation. Furthermore, it would do its level best to make the Waqf Fund/Takaful contribution more profitable and for that, it would receive its Wakalah fees which would be its profit.
The element of Riba (Interest) is removed from the whole system in such a manner that the Takaful company would invest in interest free institutions to make the fund more profitable while adhering to the rules and regulations of the Shariah and instead of premium, it would receive Tabbaru. As far as Gharrar is concerned, Takaful company is a Waqf and it does not have any direct relationship with the profit and loss of the person insured, instead the Takaful participants would share the risk from their given donations through mutual consent. Thus, the non compliant elements of the Shariah are removed along with the objections on Islamic banking that if Islamic banking defies interest then how come it practices conventional insurance which contains the elements of interest.

Now a new market will emerge in Pakistan, which would support the Islamic Financial system. Those who abstained from Conventional Insurance by calling it un-Islamic, also their savings will increase due to Takaful. With the increase in Takaful funds, the funding resources of Islamic Banks and Islamic Financial institutions will also increase alongside.
since Takaful companies have to invest without interest, their best choice would be the Islamic Banks or Financial institutions or they would opt for Sukuk (Islamic Bond), which would help in promoting the Sukuk market in Pakistan. Actually, the promotion of ‘Takaf’ is related to the expansion of Sukuk market because whenever the issues of
underwriting hedge, Insurance of underlying assets etc. will arise, only Takaful will cover them due to which both will be promoted dually. Thus the Sukuk would be more easily available as compared to the shares to the general public in the market and they would be assets backed. Consequently, the creative evolution of money in the country will come to
a halt because of the asset base which would definitely be helpful in the stability and positive economic growth of the monetary system and short term Sukuk would be the cause of formation of Inter bank market between Islamic Banks and Financial Institutes.
We can compare Takaful with a social organization where the Micro Takaful Ideology should be kept in view and used as a weapon to eliminate poverty in Pakistan.
To eliminate the poverty from the country, while keeping in view the economic, social and geographical conditions of Pakistan, if Zakat, Waqf and the ideology of Micro Takaful are brought forward together, then it would be no less than a revolution.

If Dr. Younas persists that the interest based micro finance system is the only solution for the elimination of poverty, then was the same existent at the time when there was no Zakat receiver. If we try and find solutions to our social and economic problems in the light of the Holy Quran and Sunnah, then there is success both in the world and hereafter.
With the Shariah compliant combination of Micro Takaful, Zakat and Waqf and with both positive and constructive thinking, beneficial results with regards to poverty elimination can be achieved. The question remains, who would think in a positive and broad minded manner when there is no Nobel Prize given on Islamic economics and finance, but only a question.