In 2011, shall we see the emergence of Islamic Banking? 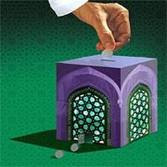 Recent reports have indicated that the central bank will soon move to regulate an Islamic commercial bank. What exactly is involved in Islamic banking?

Globally, the assets of Islamic banks have been expanding at double-digit rates for a decade and Islamic banking is increasingly becoming a visible alternative to conventional banks in Islamic countries and countries with many muslims.
Islamic banks serve muslim customers, but are not religious institutions. They are profit-maximising intermediaries between savers and investors and offer custodial and other traditional banking services. The constraints they face are, however, different and are based on Shariah law. There are four main features that differentiate Islamic banking from the conventional banks.

Prohibition against interest (Riba) is the major difference between Islamic and traditional banking. Islam prohibits Riba on the grounds that interest is a form of exploitation and is inconsistent with the notion of fairness. This implies that fixing in advance a positive return on a loan as a reward for the use of one’s money is not allowed.

Prohibition against games of chance (Maysir) and chance (gharar): Islamic banking bars speculation - increasing wealth by chance rather than productive effort. Maysir refers to avoidable uncertainty; for example, gambling at a casino. An example of gharar is undertaking a business venture without sufficient information.

Prohibition against forbidden (Haram) activities: Islamic banks may finance only permissible (Halal) activities. Banks are not supposed to lend to companies or individuals involved in activities deemed to harm society (for example, gambling) or prohibited under Islamic law (for example, financing construction of a plant to make alcoholic beverages).

Payment of some of the bank’s profits to benefit society (Zakat): Muslims believe in justice and equality in opportunity (not outcome). One way they do this is to redistribute income to provide a minimum standard of living for the poor. Zakat is one of the five tenets of Islam. Where Zakat is not collected by the state; Islamic banks donate directly to Islamic religious institutions.
In countries with significant muslim communities like Uganda, many large segments of muslims do not have access to adequate banking services-often because devout muslims are unwilling to put their savings into a traditional financial system that runs counter to their religious principles. Islamic banks seek to provide financial services in a way that is compatible with Islamic teaching, and if Islamic banks can tap that potential clientele, that could hasten economic development in these countries.

There is evidence of close correlation between financial sector development and growth. Countries whose financial systems offer a variety of services tend to grow faster. Banks, whether Islamic or traditional, play a fundamental economic role as financial intermediaries and as facilitators of payments.
The rise of Islamic banking has contributed to economic development in two main ways. One key benefit is increased financial intermediation. In Islamic countries and regions, large segments of the population do not use banks. The Islamic world, as a whole, has a lower level of financial development than other regions—in part because conventional banks do not satisfy the needs of devout Muslims.

Moreover, because Islamic banking requires borrowers and lenders to share the risk of failure, it provides a shock-absorbing mechanism that is essential in developing economies. A mechanism that allows the sharing of business risk in return for a stake in the profits encourages investment in such an uncertain environment and satisfies Islam’s core tenet of social justice. If Islamic banking can emerge, Muslim businesses stand to benefit.
Posted by AlHuda: Centre of Islamic Banking and Economics